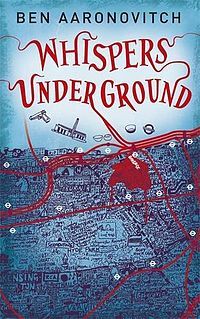 Synopsis: It begins with a dead body at the far end of Baker Street tube station, all that remains of American exchange student James Gallagher – and the victim’s wealthy, politically powerful family is understandably eager to get to the bottom of the gruesome murder. The trouble is, the bottom – if it exists at all – is deeper and more unnatural than anyone suspects…, except, that is, for London constable and sorcerer’s apprentice Peter Grant. With Inpsector Nightingale, the last registered wizard in England, tied up in the hunt for the rogue magician known as the Faceless Man, it’s up to Peter to plumb the haunted depths of the oldest, largest, and – as of now – deadliest subway system in the world.

At least he won’t be alone. No, the FBI has sent over a crack agent to help. She’s young, ambitious, beautiful…and a born-again Christian apt to view any magic as the work of the devil. Oh yeah…that’s going to go well.

Yet another enjoyable romp through London with Peter Grant, Detective Constable and apprentice wizard. This time we follow Peter as he investigates a murder in the London Underground.
I really liked how Lesley was back in action in this installment. She wasn’t really in the last book and I can’t tell you why or else I’ll spoil the first book. Lesley has joined Peter at the folly, is learning magic, and generally being her bad-ass self. All while trying to keep Peter out of trouble.
One of my favorite new characters in this series is the half-human, half-goblin Zachary Palmer. Zach plays the classic part of the endearing troublemaker who turns out to be quite helpful (albeit reluctantly.)
To be honest, this isn’t my favorite book in the Peter Grant series. It it still a really fun read and not to be missed for Peter Grant fans. I guess I was hoping for another appearance by the Faceless Man. There are traces of him in the book but he never actually shows his face (or rather, non-face). It is strongly hinted towards the end that he will feature more prominently in the next book, which I will be reading/reviewing next.
Rating: 3.5/5