Happy Valentine’s Day! This week’s Top Ten Tuesday is all about the love so I made a list of my Top 10 favorite ships! (And no, I’m not talking about boats, I’m talking about fictional couples!)

(Be My Valentine by dorisdoris)

Ah, Drarry. My very first ship before I even knew what shipping was. It was my love for Drarry that introduced me to the wonderful world of fanfiction and I haven’t looked back since. I remember reading the Harry Potter series and hoping that, at some point, Draco would confess his secret love for Harry. Alas, it was not to be, but that’s what fanfiction is for.

I know the Romione ship is quite divisive within the HP fandom but I was a fan of this pairing from the very beginning and I think I knew from book one that they were going to end up together. Even though J.K. Rowling herself no longer ships them (boo!) I’m so glad that Romione is officially canon!

Full confession: I gave up watching Sherlock after the second season after the showrunners made it clear that they were not going to put Sherlock and John together. Maybe that makes me petty, but after putting so much homoerotic subtext in the show and then not following through with it is a classic case of queerbaiting. Oh well. There’s always fanfic. 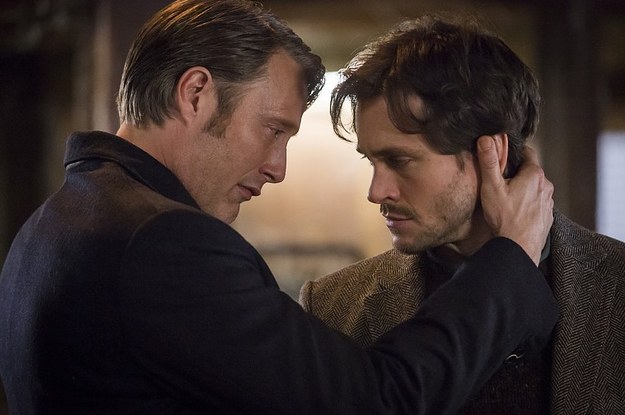 Hannigram could almost be called the anti-Johnlock. Here we have a show that is also full of homoerotic subtext but the showrunner fully acknowledges it. Bryan Fuller has said that, had the show gotten a fourth season, it would have explored the relationship between Will Graham and Hannibal ‘in a much deeper fashion than the series ever has before.’ Sadly, this brilliant, underrated show was canceled after its third season and I have had to make do with some reaaaally sexy fan art and fanfiction. The relationship between Will and Hannibal is definitely not a healthy one, but boy, is it ever hot.

5) Feysand (Feyre and Rhysand from A Court of Mist and Fury by Sarah J. Maas)

And I thought Feyre and Tamlin were a good couple. Oh man, was I wrong about that. If you’ve read A Court of Mist and Fury then you know that Feysand has completely ruined you for any other pairing. I cannot wait for the third book!

Reylo is kind of a controversial ship seeing as half the Star Wars fandom is convinced that Rey is Luke Skywalker’s daughter and that would mean that she and Kylo Ren are cousins. Personally, I don’t think that’s the way to bet. And Reylo just pushes all my shipping buttons: villain falling for the heroine, redemption of the villain through love, subtle Beauty and the Beast references….I guess we’ll have to wait and see how it all turns out. It’s not incest yet!

I don’t think I’ve ever shipped a Disney couple more. Only because it was so clear to me that Nick and Judy should end up together and they didn’t end up together! Oh my God, I was so frustrated. Apparently there was a deleted scene where Judy introduced Nick to her parents as her boyfriend and there are rumors that they will officially become a couple in Zootopia 2. Here’s hoping that this ship will sail!

8) Spideypool (Spiderman and Deadpool from the Marvel universe)

The Spideypool ship has been around for awhile but I only recently got into it after stumbling upon some very hot fan art. And then that lead to reading fanfiction and looking at more fan art and coming up with ideas for my own fic…yeah, I’m not going to lie, I went down a Spideypool rabbit hole for awhile. And I don’t regret a single second of it.

There are no words to describe just how cute Jacob and Queenie are. From what we saw in Fantastic Beasts, it definitely looks like these two are going to become canon.

10) Chirrut Imwe and Baze Malbus from Star Wars: Rogue One

This is my most recent ship and no one is going to convince me that Baze and Chirrut were not an old married couple. They are just so adorable together. They obviously care so much about each other and have each other’s backs and they’re relationship is just so perfect I can’t even handle it.

Top Ten Tuesday is an original bookish meme created by The Broke and the Bookish.

2 thoughts on “Top Ten Tuesday: All About Romance-My Top 10 Ships”