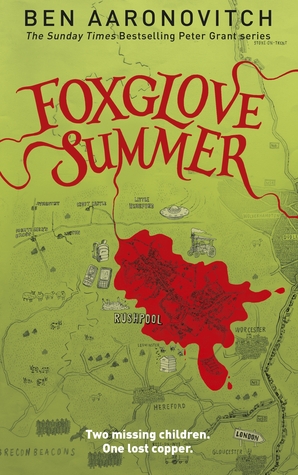 Synopsis: When two young girls go missing in rural Herefordshire, police constable and wizard-in-training Peter Grant is sent out of London to check that nothing supernatural is involved. It’s purely routine – Nightingale, Peter’s superior, thinks he’ll be done in less than a day. But Peter’s never been one to walk away from someone in trouble, so when nothing overtly magical turns up he volunteers his services to the local police, who need all the help they can get. But because the universe likes a joke as much as the next sadistic megalomaniac, Peter soon comes to realize that dark secrets underlie the picturesque fields and villages of the countryside and there might just be work for Britain’s most junior wizard after all. Soon Peter’s in a vicious race against time, in  a world where the boundaries between reality and fairy have never been less clear…

Foxglove Summer  is, hands down, the best book in the Peter Grant series so far. Ben Aaronovitch continues to expand the world of supernatural creatures and it all just seems so real. Everything Aaronovitch has created in this book fits together so perfectly that nothing feels out of place and I think that is arguably more important in a fantasy book than a realistic novel.
One thing I just have to mention is the unicorns. Yes, there are unicorns in this book and Ben Aaronovitch does a unique, disturbing twist on them. How could you not love a book with unicorns?
It is so fun to see Peter Grant out of his comfort zone, i.e. London. And we get to see more of Beverley Brook, one of my favourite characters introduced in the very first book. And I was so happy to see the introduction of Dominic Croft, an openly gay detective who is a fully realized character and not a stereotype. There have been several gay characters in the Peter Grant novels and I love the way Ben Aaronovitch writes them – as real people, not caricatures. If you are like me, and are craving more diverse books, the Peter Grant series has got you covered.
I’ve talked about the twist ending of the previous book which was one of the reasons I was anticipating this book so much. We definitely do not get any closure but there are some serious hints dropped about what actually happened, how Peter’s dealing with it, and what’s going to happen next. My prediction: something big is going to happen in the next book and this series will reach truly epic proportions. Sorry if this is all a little bit vague but I don’t want to spoil anything.
Rating: 5/5